Awesome controls are coming for the Silverlight platform

Now that the wait is over and Silverlight 2 is out there in the wild, there's very little excuse not to be using this awesome Microsoft platform. Easy-to-use controls make fast, easy development possible, and there is a clear roadmap out there now on what all is going on.

Last week I was really bunkered down with Silverlight. That and upgrading to the 64-bit Photoshop. That's nice, but I'm always pressing Alt-Tab to use Expression Blend. You really can build expressive apps with Silverlight.

I know for a fact that there's some neat work happening in the community, and do apologize for being silent on the blogging front. Here's some of what's going on.

The controls that ship with the Silverlight 2 runtime and SDK are slick. They received crisp, refined styles this time around, and the experience for application and interface developers is feeling similar to WPF now. There's also a progress bar and password box built-in now. 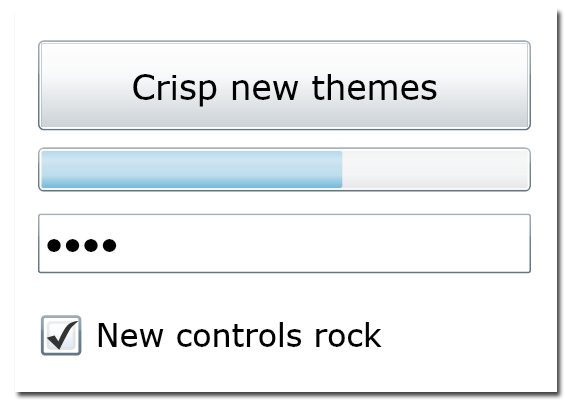 If you're not using the DataGrid in your apps, you're missing out: Scott Morrison has been busy updating all of the great DataGrid tutorials for the final release version. Key messages: Performance, customizable, and new features too, like multi-selection.

With the final Silverlight 2 release a little over a week ago, Shawn Burke blogged about the progress that we're making on the Silverlight Toolkit. There are neat controls in the pic that he posted: Expander, a TreeView, NumericUpDown, and an AutoComplete text box.

Oops. I hit the wrong button, and Windows Live Writer seems to have posted a screenshot of a sample that I had up on my desktop... hmm... It sort of looks like a text box. And a drop down. Yet it has a DataGrid, too. Interesting...

So, stay tuned. Reiterating the cool things Shawn's talked about:

Yesterday Tim Heuer posted some Watermarked TextBox goodness on his blog, in case you were looking for that one.

A few days ago a friend pointed me to the SilverlightContrib project. I'll admit I don't know a lot about it, other than the bullet points I saw on the homepage. I'm not associated with this project in any way, but want to give it props. Just look at some of the things it has:

Check it out! There is a live demo page out there, too.

If you're looking for something to do next weekend, it sounds like all the Microsoft geeks will be converging on the Los Angeles Convention Center for PDC 2008. There is even a nice convincing letter you can send your boss. Let me know if that works for you.

I've been involved in Silverlight for a few years now, in one capacity or another - and the trip has been awesome.

I won't reminisce much, other than to say that I do have vivid memories of the weeks that debugging didn't work... the weeks that the wrong clicks in a sequence could cause problems... What was released last week is solid.

Major kudos to everyone that made the release happen, it has been a pleasure working with you all. Now we're going to see just how fun this gets. There's more to come.