Notes on Silverlight and Phone Toolkits, Testing and Other Phone Stuff

The long-rumored Windows Phone 7 update is even closer, a new developer release download is now available. Please do update to the tools now! You can continue to use the tools to build apps for the marketplace today. (Release notes)

New functionality: Copy and paste support for apps. It just works in your apps, too, so that’s nice – no special action required to enable it for controls. Text boxes, password boxes, and the browser control “just work”.

This is yet another set of patches on top of the original tools download, so it’s not a pretty update, but it is worth the multiple downloads.

Rebuilding your applications that use Panorama, Pivot, and Maps

You might want to rebuild your application and resubmit it to the marketplace if you meet a few conditions:

The reason that you have to rebuild is because these are “client libraries” that are built into your actual .Xap that goes to end users, so to get the goodness of these changes, you have to resubmit a new Xap with these updated client library bits in them.

Looking at Copy and Paste in action

So if you have an app that uses text box, you’re ready to go. Here’s what it looks like when you use the newest tools build, that contains the ROM image with copy & paste built into the framework.

Select some text in the text box 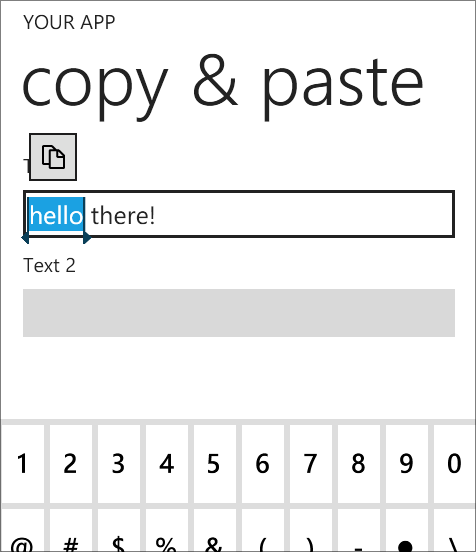 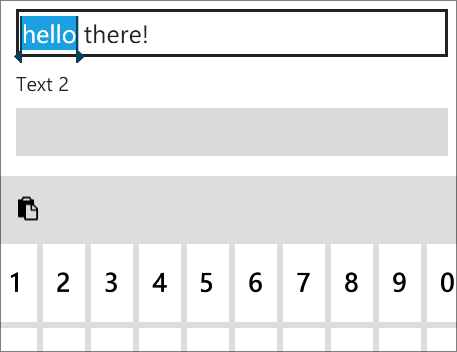 In the SIP (software keyboard), click the paste icon to insert it!

There is no programmatic API to access the clipboard at this time.

We’ve been addressing customer-reported bugs and issues with the previous Silverlight for Windows Phone Toolkit release, and are getting close to having something ready. As we’ve always been a small, agile, dedicated team, we’re trying to fix up a few last-minute issues before pushing the button.

We will also be adding Visual Basic samples this time around.

Some of the fixes you can look forward to:

Something we are trying with the phone toolkit now is offering important fixes and other changes directly in the source control, ahead of the next official binary release. This allows us to better serve folks by offering a preview of what’s coming.

Here’s where you go to list all the changesets we’ve submitted for the toolkit source: http://silverlight.codeplex.com/SourceControl/list/changesets

If you build the source for the toolkit in your project, then you can easily get these new changes. And, you’re an honorary member of the Silverlight Toolkit testing team ;-) since you can help us uncover issues and send feedback ahead of the larger release.

This kind of input is super important. We’ll try not to push bugs to the source control, but it can happen!

It’s very exciting being a part of the Silverlight Toolkit and its sister release, the Silverlight for Windows Phone Toolkit. The large source tree is a great learning resource for Silverlight developers everywhere w.r.t. custom control development. But it is also true that we don’t accept external contributions to the toolkit at this time, it is a pull-only repository. You’re free to fork it into your projects and enjoy it as you like, but if you submit patches to the site, we unfortunately cannot use them. Recently we updated the homepage of the Silverlight Toolkit to note this, since we don’t want to waste anyone’s time creating patches that cannot be used (sorry!).

Here are a few notes specific to the toolkit for Microsofties, however…

If you are a Microsoft dev

If you are a full-time Microsoft employee and using the Silverlight (or phone) Toolkit, we’re happy for that, and are definitely interested in accepting any bug fixes or improvements to the existing controls. Just send me an e-mail to talk about this, since we do have a set of guidelines and process for this sort of thing.

We recently had a number of great unit test fixes come in this way, and appreciate the help, since we often can only focus on one release of technology at a time.

If you are a Microsoft team

Microsoft teams looking to use the Silverlight Toolkit can find more information at this internal link.

If you want to be a Microsoft developer

We’re always hiring – find out more at the http://careers.microsoft.com/.

There have been a flurry of bug fixes checked into our source control system for the unit test framework, powered by customer-reported issues and a few generous developers inside Microsoft who have contributed improvements that their teams have been using.

Some of the fixes and changes include:

When I have new builds ready and blogged, I’ll also be updating the source on the public CodePlex site. No timeline for this yet, though; sorry.

If you follow my Twitter stream (@jeffwilcox), you know that I often spend my evenings and weekends coding. I’ve been building a social app for Windows Phone and it has been a really fun (and challenging) process building an app from the ground-up.

Once the app is finished, I will be covering in detail the challenges and issues I encountered, and strategies for dealing with many of the issues large apps are hitting. I’m also trying to get the best guidance on improving scrolling performance in lists, and have spoken with a number of devs about this recently.

I also wanted to take this time to thank everyone that I’ve had the pleasure of interacting with in the past year. It’s been exciting, bringing our new platform to light, leveraging years of hard work we have done on the Silverlight team.

This was nice for me as I was able to meet other folks at Microsoft worldwide, developers in so many places, and sit with smart engineers from other companies for a change. Well worth the price paid sitting in the back of planes. I swear I could walk through SEA-TAC airport with my eyes closed now.

Thanks, happy new year, and enjoy the Super Bowl if you’re in the states and into American football.